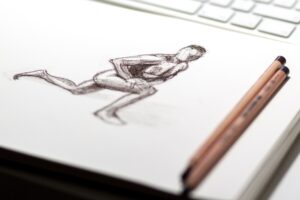 3D computer animation is a time-consuming and highly technical medium — to complete even a single animated scene requires numerous steps, like modeling, rigging and animating, each of which is itself a sub-discipline that can take years to master. Because of its complexity, 3D animation is generally practiced by teams of skilled specialists and is inaccessible to almost everyone else, despite decades of advances in technology and tools. With the recent development of tools that facilitate game character creation and game balance, a natural question arises: is it possible to democratize the 3D animation process so it’s accessible to everyone?

To explore this concept, we start with the observation that most forms of artistic expression have a casual mode: a classical guitarist might jam without any written music, a trained actor could ad-lib a line or two while rehearsing, and an oil painter can jot down a quick gesture drawing. What these casual modes have in common is that they allow an artist to express a complete thought quickly and intuitively without fear of making a mistake. This turns out to be essential to the creative process — when each sketch is nearly effortless, it is possible to iteratively explore the space of possibilities far more effectively.

In this post, we describe Monster Mash, an open source tool presented at SIGGRAPH Asia 2020 that allows experts and amateurs alike to create rich, expressive, deformable 3D models from scratch — and to animate them — all in a casual mode, without ever having to leave the 2D plane. With Monster Mash, the user sketches out a character, and the software automatically converts it to a soft, deformable 3D model that the user can immediately animate by grabbing parts of it and moving them around in real time. There is also an online demo, where you can try it out for yourself.

Creating a 2D Sketch
The insight that makes this casual sketching approach possible is that many 3D models, particularly those of organic forms, can be described by an ordered set of overlapping 2D regions. This abstraction makes the complex task of 3D modeling much easier: the user creates 2D regions by drawing their outlines, then the algorithm creates a 3D model by stitching the regions together and inflating them. The result is a simple and intuitive user interface for sketching 3D figures.