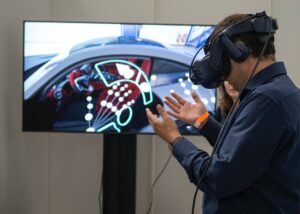 Virtual Reality Hospital – There is quality sound, and there is noise. Sadly, in our day-to-day lives, we have way too much of the latter. Excessive noise can cause several short- and long-term health problems, such as sleep disturbance, cardiovascular effects, poorer work and school performance, and the most obvious risk: hearing impairment. Noise has emerged as a leading environmental nuisance in the World Health Organization’s European region, and the number of public complaints about excessive noise is growing. Some groups are more vulnerable to noise, like children and chronically ill patients.

A new Bay Area startup called Spatial wants to help make the sound around us into a more rewarding experience. Last month, it announced a unique portfolio of products focused on creating immersive and dynamic audio experiences for public spaces. From creation to deployment, Spatial (not to be confused with Spatial the augmented reality company), says its solution is unique because it does not require proprietary and costly equipment to create and deploy soundscapes. The program can run on a Linux machine or a Mac Mini, output sound to any speaker, and can be controlled via a mobile app.

In its product launch, Spatial emphasized its potential for use in public spaces such as museums, hotels, and amusement parks. But I was most interested in another use case: well-being.

Spatial strongly believes that immersive sound has potential as a therapeutic tool. COO Darrell Rodriguez—formerly the COO of Electronic Arts and president of LucasArts, as well as an ex-Disney Imagineer—says that the company wants to make a profit but also wants to have a social impact.

To that end, Spatial has been working with the California Institute of the Arts and Roger Holzberg, founder of Reimagine Well, a company that creates immersive experiences for patients delivered via screens and virtual reality headsets